In my previous article (Voodoo and Hoodoo – what are they really all about?), I explained how West Africa is the cradle of Voodoo, and talked about the nature of the religion there, as well as giving you a look into a young initiates ceremony.  In this second part of the article you can find out more about Voodoo in different parts of the world, and learn about the magick and practices of Hoodoo

As I explained the previous article, Voodoo traveled to countries such as the US and Haiti, through African people being sent into slavery, and the religion became different things in different places.  The Voodoo (or Vodou) of Haiti is close to that of Benin, although has absorbed many religious elements from Christianity.

Voodoo in Louisiana and New Orleans

Like the Voodoo of Haiti and the Hoodoo of the US, Christianity has been a large influence upon the beliefs of this religion, whilst at the same time keeping much from the Voodoo of Benin.  The flexibility and adaptability of Voodoo is no doubt a lot to do with the face that there is no formal doctrine or sacred book, and knowledge is passed orally.

Like Paganism, the religion can mean different things to different people, but a core belief is that the main God does not interfere in the everyday lives of people, instead it is spiritual forces which affect everyday life.  Just like the Voodoo of Benin, communication with the spirits is achieved through dancing, chanting, drumming and so on, and ancestor worship is also important.

Louisiana Voodoo is commonly used to help people with sicknesses, addictions and other ailments, and also to help the hungry and poor.  Rituals tend to be conducted behind closed doors.

Jesus Christ and Mary are important figures in the religion and reciting the Hail Mary and the Lord’s Prayer is part of Louisiana Hoodoo practice. 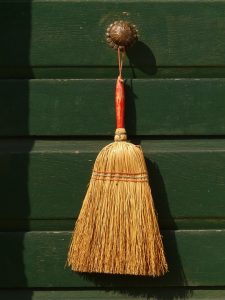 Here are some spells and superstitions from Louisiana Voodoo

Whilst Voodoo dolls are usually thought in Western culture to be a way of harming people, this is incorrect, they are to bless people.  Pins are stuck in the dolls to attach a picture of the person to the doll, thus creating a magical link, and then a magical cure is performed using a special recipe (the cure is known as a gris gris), and is usually either for love, power, luck and finance or removing a curse.

Hoodoo can be called folk magic is better understood as a collection of magical practices rather than a religion, and this is made clear by changing the name from Voodoo to Hoodoo.  Hoodoo’s magick focuses on using roots, herbs and natural elements for magical and medicinal use.

However there is still worship of deities, and like the Haiti Voodoo, (in fact perhaps more so) many Christian elements have been absorbed into the religion.  Christian figures such as Moses are worshiped, and the Bible is seen as a source for spells, particularly the Psalsms.  The bible itself can be carried as a talisman to keep people safe.  Hoodoo also absorbed certain Native American practices as well.  Like Paganism there is no formal doctrine, or structured hierarchy, and knowledge tends to be passed on orally.

Some Magickal Items of Hoodoo

Hoodoo magick items have become popular with people from all around the world, and from all traditions. I have tried Goofers Dust To Defeat Enemies.  This green dust can be thrown on the land of someone that means you harm, to bring confusion and bad luck to their household.

This works well in tandem with Hot Foot Powder Incense, which can be sprinkled around your home to keep away enemies and troublemakers and to bring peace to your household.

Another popular Hoodoo item is the Lucky Hand Root for Protection and Good Fortune, so called because it resembles a small withered hand (but it’s only an orchid root!).  This root is known for bringing good luck and safety, and is particularly used for bringing luck to gamblers.

Cobra Black Snake Pellets can be used in rituals of protection, and are also a great magickal aid for spiritual healing rituals, cleansing such as cleansing a space for an altar, or a new home, and to assist in removing curses or jinxes.

Finally another popular Hoodoo ingredient is the Adam and Eve Roots for Love and Marriage proposals.  This can be used in two ways, firstly a charm to encourage that special someone to propose, or for good luck to encourage the person to say yes!  Secondly it can be used by lovers to help discourage rivals and prevent temptation.  The woman carries the round white seed and the man the long bud.

Want to know even more about Voodoo and Hoodoo?

Here is a great site full of interesting information, written by a Voodoo practitioner.  A page I found particularly interesting was this one which goes into more detail about what Hoodoo is and where it came from.

Are you interested in Voodoo and Hoodoo? Have you or would you try Hoodoo Magick?  Comment below and feel free to ask me any questions beliefs or practices, or contact me privately through my website if you prefer.