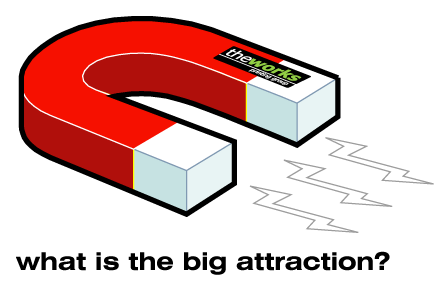 Can the Law of Attraction get you a home, a job, a partner or whatever else you may wish for? I think it can but perhaps not in the way you think.

With the popularity of ‘The Secret‘, many people are now trying the law of attraction to get what they want.  In case you’ve been in a hole and never heard of it, it basically involves building up a clear picture of what you want in your head, and thinking about it, putting energy into it until you get what you want.

It also says that if you spend too much time focusing on what you are afraid of, or don’t want, that you will attract this too.

I’ve seen quite a few disillusioned people on the internet sharing their experiences.  One guy (sorry forgotten where I saw it) had spent a lot of time visualising what he wanted and it never transpired.  This led him to think out the rules of the law of attraction and find it useless on this basis:

His opinion was that believing that what we think influences what happens is a mistake understanding of the causal chain – eg when about to start a flight many passengers may be worrying about it crashing, but it still doesn’t crash because thought don’t influence things in this way.

Is he right?  Well yes and no.  Some people worrying about the plane crashing is not going to have any effect.

What if 300 people onboard willed (as opposed to worried about) it to crash? Possibly this might affect it (after all I do believe spells are possible, which are a sending of intention) but I doubt anyone is going to test it out particularly soon, and quite possibly it wouldn’t be strong enough to have an effect.

But in essence this guy is right, simply thinking about things is not enough to change things, but it is a very good start as long as you realise that it is just the start.  One of the most important things in life to me is helping people to realise that we all have the power of our own destiny.

I strongly believe and have seen much evidence to support the idea that the more energy you put into something the more you will get back.

Does that mean every project you do will succeed? No, but usually you will get some kind of energetic reward for putting effort into something, even if it just experience and determination to do better, but quite frequently new doors will have opened just by the fact that you take action.

ACTION! Yes this word is perhaps the key word for this article, since that is what most people who find the secret and law of attraction unsuccessful don’t realise.  Putting the thoughts and energy into creating the ideas things you want is the vital first step, and doing this correctly will set you up for success.

But if you don’t actually go and do anything, just let these little dreams and ideas sit in your head, that’s all they will ever be, ideas.

It can feel really difficult to begin something new (right now I am trying to make dragon t-shirts and have nearly given up several times before I even really started due to my fears of failing and it looking rubbish) but all you have to do it push through that fear and take even baby tentative steps on your journey.

Most likely you’ll be spurred on my your progress, no matter how small, and then all your mental focusing and energy can be expressed, or possibly you realise the project is no good and can begin starting to look for another better way to do things, which in turn will lead to success!

So that’s what I think, and in fact have long since thought about achieving what you want.

What do you reckon, does the Law of Attraction really work? Have you used The Secret, Cosmic Ordering or some other similar idea or mindset? Let me know below!

One thought on “Does the Law of Attraction Really Work?”